Regular Price $44.95 Special Price $42.95
Out of stock
SKU
20-001
nfortunately, the Government doesn't take Zombie preparedness as serious as we do and has ruined the good old days... Due to possible legality issues Zombie Industries no longer sells, advertises or markets this product to customers in the following States; California, Maryland, New York and Hawaii.
Add to Wishlist Add to Compare
Skip to the end of the images gallery 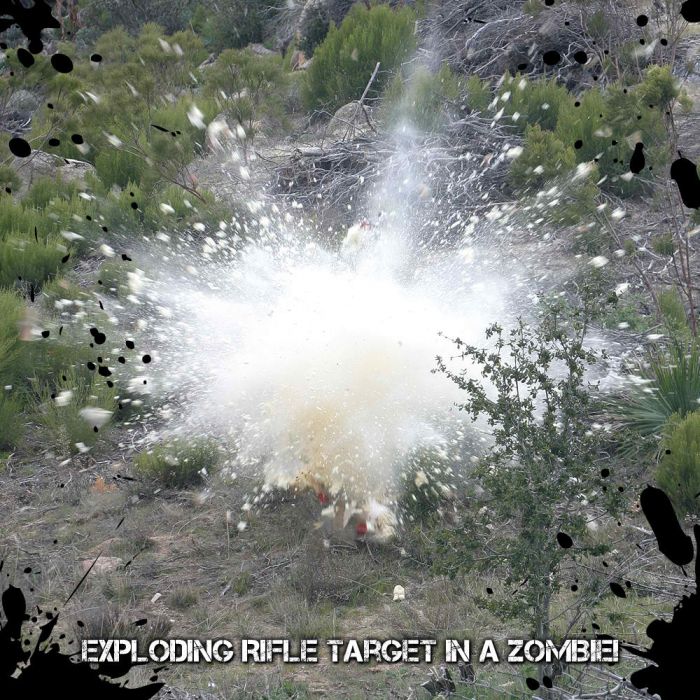 Unfortunately, the Government doesn't take Zombie preparedness as serious as we do and has ruined the good old days... Due to possible legality issues Zombie Industries no longer sells, advertises or markets this product to customers in the following States; California, Maryland, New York and Hawaii. If you live in these states we will NOT ship to you under any cicumstance!!! For customers in other States ALWAYS check your local State laws before purchasing any exploding targets. Ignorance of the law is not an excuse, nor will Zombie Industries be liable for your actions when using ZomBoom™ Exploding Targets.

Zombie Industries’ ZOMBOOM!™ Exploding Rifle Targets allow for an easy way to help eliminate the bio-degradable material remaining after pumping hundreds of rounds into the Undead. By placing ZOMBOOM! in the back of a Zombie Industries Zombie, clean-up and waste disposal will be cut by 87.2%, guaranteed!

What? Our Zombie invasion hasn’t made it to your neck of the woods yet? If that’s the case, use ZOMBOOM! Exploding Rifle Targets independently to practice your long-range sniper skills…because you’re gonna need’em. Zombies have a keen sense of smell and at a range of 100 yards; a Zombie can identify your position by the mere and diminutive scent of your white cerebral matter. Not only will ZOMBOOM! help you calibrate that perfect kill-shot, once hit, ZOMBOOM! emanates our special blend of aromatic chemicals that impede the Undead’s blood-hound sense of smell (or English Sheep Dog if “yor in-tha-Ewkaay”).

Be warned, ZOMBOOM! Exploding Rifle Targets should NOT be used at less than 100 yards or injuries may occur! Positive impact of ZOMBOOM! while using a high-powered rifle, will create an explosion designed to help you witness that ultimate long range kill-shot. While it promotes HUGE laughs with its sonic boom, this product is not a toy, nor should it be treated as anything other than an explosive, your safety depends on it!

Remember, the use of Zombie Industries’ ZOMBOOM! Exploding Rifle Targets are permitted by law but only if used as described in the Simple, Legal, Instructions area below.  Although targets are lawful, this will not acquit you of any legal ramifications if manipulating any explosive device or product in a negligent or reckless manner. Customers have been charged with “Disturbing the Peace” as well as other crimes when using compositions of this nature, as anything OTHER than a shot indicator. DO NOT augment or make any changes to the chemical structure, as this could generate an unstable product. WE ASSUME NO LIABILITY REGARDING ANY USE OF THIS PRODUCT.  USE AT YOUR OWN RISK.  CONSIDER YOURSELF WARNED!!!  Zombie Industries’ ZOMBOOM! Exploding Targets are safe, legal, and fun.  Please use responsibly, don’t ruin it for the rest of us. Got-it?

ZOMBOOM! targets are not flammable, but may cause other near by objects to catch fire in the right conditions when exploding!!!