Regular Price $89.95 Special Price $79.99
Out of stock
SKU
10-013
Bobo the miserly Clown was always on a budget, always looking to save a buck on his costumes, so this cheap-skate went searching in the old paint factory dumpsters.
Add to Wishlist Add to Compare
Skip to the end of the images gallery 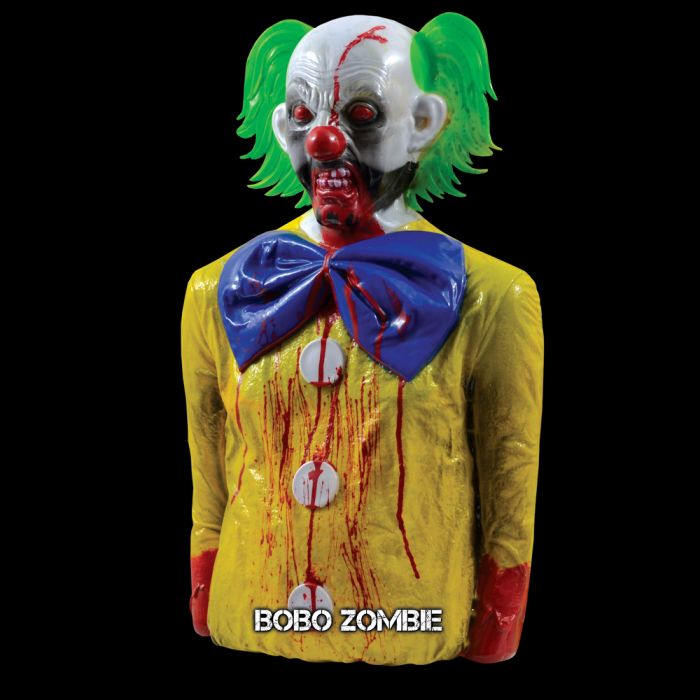 Bobo the miserly Clown was always on a budget, always looking to save a buck on his costumes, so this cheap-skate went searching in the old paint factory dumpsters… He found some old moldy tubes of what he thought was face paint deep in the dumpster, he couldn’t wait to get them home and try them out.  When he opened them up, they had a vile odor, but he figured for free he’d make due.  Upon painting his face and arms, he noticed an intense burning sensation as if his skin was on fire.  These paints were loaded with Zomaldehyde, an industrial strength form of formaldehyde used to stabilize toxic chemicals.  When mixed with the lead base of the paint, it made for a more than lethal chemical pigment, which went right into his blood stream and rendered him brain dead within seconds.  With such large amounts of Zomaldehyde in his system to preserved his flesh… Bobo was now a moaning Undead Clown searching for his next unhappy victim.

LOCATION ALERT: Bobo the Clown was recently seen running through the Del Mar Fair’s Haunted House in search of young children’s brains! Keep your wits about you the next time you’re going to the fair, or it could be your last time eating fried mayo rolls!!!

Each Patent Pending “Bobo the Clown” Zombie is cloned in our San Diego, California facility and is hand painted to accurately resemble an infected clown that just finished gnawing young Timmy’s eye out, to give you that realistic look so you really hate this clown! What makes our Zombie’s so special?  They’re filled with biodegradable matter, which makes clean up a wee-bit easier…(are you happy, mom?) …and oh yah, let’s not  forget, they bleed and burst into little pieces of blood soaked, Zombie Clown matter when you shoot them!